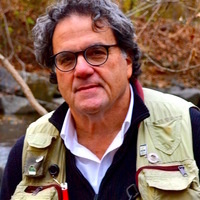 Dan Rodricks is a long-time columnist (and podcast host) for The Baltimore Sun, and a local radio and television personality who has won several national and regional journalism awards over a reporting, writing and broadcast career spanning five decades. Rodricks has written some 6,000 columns for the Sun, and along the way he many times revealed his love of nature and of fishing. Rodricks embraced fly fishing in the early 1990s, and that style of fishing opened doors to new relationships with people and places--and one place in particular, the “secret” creek in Pennsylvania that, once allowed to recover from harmful over-fishing, became a trout paradise again.

The Ivy Bookshop will have books for sale at a book signing following the program.