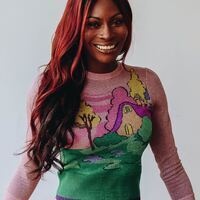 An Evening with Dominique Jackson

Registration not required, but encouraged. Click here to register through Eventbrite. Presented in partnership with STAR TRACK and Chase Brexton.

Honor Pride Month with Chase Brexton, Enoch Pratt Free Library, and STAR TRACK. Dominique Jackson will be in conversation on her life and work.

Model, Actress, Author, Advocate and Activist Dominique Jackson was born on the smaller island of the twin island Republic of Trinidad and Tobago. At the age of 15, she moved to the US to escape traumatic situations. Jackson graduated in the 10th percentile of her class at Owings Mills High School before going on to attend Fayetteville State University and Morgan State University. Enduring intolerance, discrimination and prejudice, Jackson left school and moved to New York City, where she became a member of The Underground House/Ball Community, the NYC LGBT Entertainment Circle and The Pageantry System - winning six crowns/titles while competing locally and nationally.

A leader in her community, Jackson has been awarded several accolades and was also inducted into the House and Ballroom Hall of Fame and deemed Iconic on February 27, 2016 at the NYC Ball Awards. In 2017, Jackson received the Legacy of Pride Award presented by Harlem Pride and received the first Bronx LGBT Leadership Award presented by Bronx Borough President Ruben Diaz JR and Allies LGBT PRIDE CELEBRATION. That same year, she was honored with the New York State Assembly Citation issued by Mark Gjonaj.

A fashion model since 2000, Jackson began her career at Brooklyn Fashion Week before moving onto Mercedes-Benz Fashion Week. In 2011, she served as Mistress of Ceremonies in Solomon Harris’ take on the ballroom scene Newark Is Burning at NJPAC (Newark, NJ). Jackson is one of the resident models to Adrian Alicea Couture, Manuel Pelferes Couture and Angel Ayala Couture. She added Gypsy Sport by Rio Uribe and Stevie Boi to her runway accomplishments during 2016 Fall/Winter Fashion Week.

In 2014, Jackson released her autobiographical memoir The Transsexual from Tobago (Revised). Later that year, she starred in Carla Pridgen’s Incongruence produced by Ivy Theatre. In 2016, she starred in Oxygen Network’s GLAAD Award winning reality docu-series Strut, executive produced by Whoopi Goldberg and Tom Leonardis, and the short film T Times by Gabriel Torres.

Order your copy of The Transsexual from Tobago from the Ivy Bookshop.