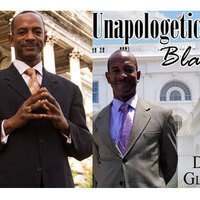 Unapologetically Black is the story of Doni Glover's trek from the streets of East Baltimore to two decades of journalism that has taken him to Canada, Jamaica, Tanzania, Ethiopia and Jordan. Along the way, he has hosted the longest-running customized news talk show in the nation at Radio One. More importantly, he joined the Fourth Estate twelve years ago when he founded www.bmorenews.com. Since then, his flagship online news service now garners one million hits per month with visitors from 200 nations. Boasting one of the largest African American news video libraries in the nation, Bmorenews.com has become a voice for the voiceless and a vehicle for change -- beginning in the DMV (DC/Maryland/Northern Virginia).

Doni Glover owns DMGlobal Marketing & Public Relations, a firm dedicated to helping clients expand their footprint in the black community. He works with politicians, lawyers, businesses, non-profits, artists, and authors to help them gain much-needed exposure. Finally, Glover started the Original Black Wall Street SERIES *NYC *MD *DC *ATL in Washington, DC in 2011 with Sisters4Sisters Network, Inc. Since then, he and his supporters have recognized tons of black entrepreneurs and professionals along with the people who support them regardless of race.