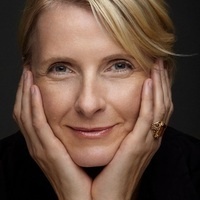 Elizabeth Gilbert will be in conversation with Cija Jefferson about her work. In her lectures Gilbert talks about her writing and seizing the opportunity to live a life guided by creativity rather than fear.

Gilbert’s memoir, Eat Pray Love, exploded onto the scene in 2006. The #1 New York Times bestseller famously chronicled the year Gilbert spent traveling the world after a shattering divorce. Translated into more than 30 languages, it has sold over thirteen million copies, and was adapted into a 2010 film starring Julia Roberts and Javier Bardem. Following Eat, Pray, Love, Gilbert wrote Committed: A Love Story, a meditation on marriage as a sociohistorical institution.

In the years since, people around the world have looked to Gilbert for guidance in leading brave, authentic, and creative lives. Gilbert’s bestselling nonfiction treatise, Big Magic: Creative Living Beyond Fear, unpacks her own generative process and shares her wise, witty insights into the mysteries of curiosity and inspiration.

From the beginning of her writing career, Gilbert’s observant eye and abiding appreciation for her subjects has distinguished her work. Starting as a magazine journalist, she wrote articles published in Harper’s Bazaar, Spin, and The New York Times Magazine. Her work caught the attention of editors at GQ, where she soon became a stalwart, writing vivid, provocative pieces that grew into books and even a film: 2000’s Coyote Ugly. Gilbert was a finalist for the National Magazine Award, and her work was anthologized in Best American Writing 2001.

Cija (pronounced Kia) Jefferson is the author of Sonic Memories/and other essays. She is a writer, and an academic advisor at Maryland Institute College of Art. She earned her MFA in Creative Writing & Publishing Arts from University of Baltimore, and BA from Sarah Lawrence College. Her writing has been featured in multiple publications including Sisters From AARP, Linden Avenue Literary Journal, Baltimore Style, and The Conversation w/ Amanda de Cadenet.