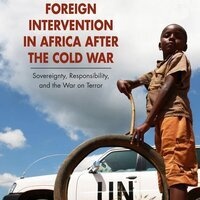 Writers LIVE: Elizabeth Schmidt, Foreign Intervention in Africa after the Cold War: Sovereignty, Responsibility, and the War on Terror

Elizabeth Schmidt will discuss her new book, Foreign Intervention in Africa After the Cold War, and refugee resettlement in Baltimore with Akalu Paulos.

Since the mid 1980s, Akalu Paulos has been an active participant in development programs as a practitioner, consultant and researcher, working for public, non-profit, and international multi-lateral governmental organizations in Ethiopia. In the last 13 years in the United States, Akalu’s career has largely focused on refugee resettlement and training in Baltimore, under a program funded by the US Federal Office of Refugee Resettlement. In his capacity as the Refugee Program Manager for Baltimore City Community College since July 2012, he has facilitated the linguistic, economic and civic integration of more than 4000 refugees resettled in Baltimore. He earned his masters in Development Studies from the University College Dublin, in Ireland, and has extensively written and spoken on issues of human rights, gender, governance, and civil society at international conferences in four continents.

The Ivy Bookshop wil have books available for purchase after the program.