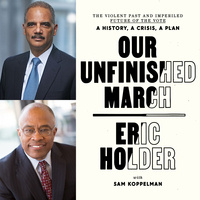 Former U.S. Attorney General Eric Holder will provide a history of voting rights and weigh in on combating voter suppression.  Mr. Holder argues that recent legislation in several states has hindered the voting rights of many people and highlights the fragility of American democracy.  Eric Holder will be joined in conversation by University of Baltimore president and former Baltimore mayor Kurt Schmoke.

Eric Holder served as the U.S. Attorney General during the Obama administration (2009-2015), and is the first African American to hold the office.  He is currently an attorney and chairman of the National Democratic Redistricting Committee.

Kurt Schmoke is the president of the University of Baltimore.  He served as the mayor of Baltimore from 1987-1999.

The Brown Lecture Series is supported by a generous grant from the Eddie C. and C. Sylvia Brown Foundation.