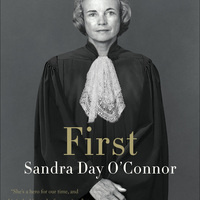 In First, Evan Thomas illustrates how Justice O’Connor not only built a bridge forward for all women, but also served as a beacon for how our public officials should serve their country: her life offers a roadmap for when to fight and when to concede, for how to love and when to say goodbye.

Evan Thomas is the author of ten books, including the New York Times bestselling John Paul Jones, Sea of Thunder, and Being Nixon. Thomas was a writer, correspondent, and editor for thirty-three years at Time and Newsweek, including ten years as Washington bureau chief at Newsweek.

Evan Thomas will be in conversation with his wife, Osceola Freear Thomas. She is a graduate of Stanford and University of Virginia Law School. She was a lawyer with a litigation law firm in New York and later a Vice President of AT&T.