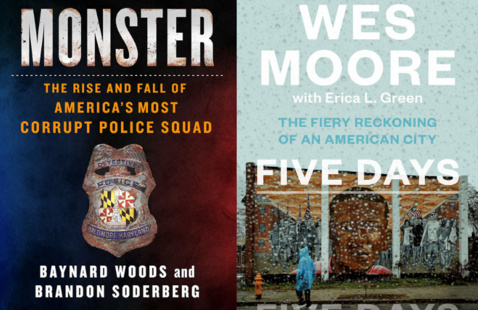 FREE tickets for Zoom Webinar and Facebook Live go on sale October 28 at 9am through Eventbrite.

Join us for a discussion with Erica Green, Tawanda Jones, Brandon Soderberg, and Baynard Woods. Presented in partnership with OSI Baltimore. They will discuss overlapping themes in Five Days and I Got a Monster, including whose stories are valued in the public discourse, the role and responsibility of the press, the narrative of a city, and the pursuit of justice. West Wednesday will be honored during the program.

Erica Green is a correspondent in Washington who covers the U.S. Department of Education and Secretary Betsy DeVos, focusing on federal policy, educational equity and civil rights enforcement in the nation’s K-12 schools. Ms. Green's education coverage at The New York Times won first place in the beat reporting category at the Education Writers Association's 2018 National Awards for Education Reporting.  Before joining The Times in 2017, Ms. Green, a native Baltimorean, covered the Baltimore City school system for The Baltimore Sun.  Ms. Green was also part of the Sun team named a 2016 Pulitzer Prize finalist for breaking news coverage of the death of Freddie Gray and the unrest that followed. She collaborated with Wes Moore on the book, "Five Days," which details the April 2015 events through the eyes of Baltimoreans as the "Baltimore Uprising" unfolded.

Tawanda Jones is the sister of Tyrone West; she and her family started “West Wednesday,” a weekly protest and safe ground to speak out against police brutality and murder. She is also the founder of West Correlation. Jones and her supporters have moved West Wednesdays online, featuring the family members of victims of police violence from around the country on a weekly live stream. In addition to this weekly work, Jones also works to change laws at the state level. She is the mother of four children, a pre-k teacher and a freedom fighter.

Brandon Soderberg is a writer living Baltimore and was previously the Editor in Chief of the Baltimore City Paper and a contributing writer to SPIN. His work has appeared in The New York Times, Vice, The Village Voice and many other publications.

Baynard Woods is a writer living in Baltimore. His work has appeared in The New York Times, The Guardian, The Washington Post, and many other publications.

Visit theivybookshop.com to purchase a copy of I Got a Monster and Five Days.

FREE tickets for Zoom Webinar and Facebook Live go on sale October 28 at 9am through Eventbrite.