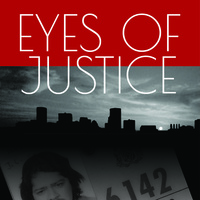 James Cabezas will be in conversation with co-author Joan Jacobson.

Despite a childhood affliction that left James Cabezas with the grim knowledge that he might one day go blind, he led a courageous career in law enforcement for more than four decades. With his vision intact, Jim proudly wore a police uniform, tracking drug dealers, thieves, and an armed robber in the precarious days before Baltimore cops wore bullet proof vests. While the world’s finest eye doctors kept him from going blind, Jim worked as a deep covert, driving a cab in Baltimore’s notorious red light district. While his eyesight continued to deteriorate, Jim defied a government doctor who ordered him to stop working. Instead, he got a talking computer.

No matter the hurdle, Jim performed his duties relentlessly. Eyes of Justice is a memoir of one man’s faith and devotion to duty who refused to be defined by his disability.