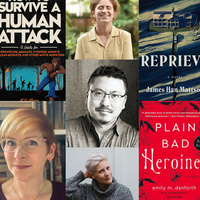 James Han Mattson, Sara Lautman, and Emily Danforth will be in conversation about their work with Kathy Flann.

Sara Lautman is a cartoonist and illustrator. Her drawings have appeared in The New Yorker, The New York Times, Playboy, and The Paris Review, among other publications. She lives in Baltimore, where she teaches on faculty at MICA and feeds the cats.

Kathy Flann’s prose has appeared in The North American Review, Michigan Quarterly Review, Shenandoah, and others. She has published two award-winning short story collections, Get a Grip and Smoky Ordinary. Releases also include a craft book, Write On: Secrets to Crafting Better Stories, from Stay Thirsty Publishing, and a humor book, How to Survive a Human Attack, a guide for movie monsters, from Running Press/Hachette. She is a recipient of grants from the Maryland State Arts Council and the Baltimore Office of Promotion and the Arts, as well as a Baker Artist Award.

Order your copy of Reprieve, How to Survive a Human Attack, and Plain Bad Heroines from the Ivy Bookshop.

Buy Tickets
This event content is powered by the Localist Community Event Platform.