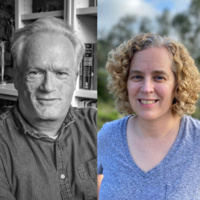 Jen Michalski and James Magruder will be in conversation about their latest books, You'll Be Fine and Vamp Until Ready.

Jen Michalski is the author of three novels, The Summer She Was Under Water, The Tide King (both Black Lawrence Press), and You’ll Be Fine (NineStar Press), a couplet of novellas entitled Could You Be With Her Now (Dzanc Books), and three collections of fiction. Her work has appeared in more than 100 publications, including Poets & Writers, The Washington Post, and the Literary Hub, and she’s been nominated for the Pushcart Prize six times. She lives in Carlsbad, California, with her partner and dog.

James Magruder is a fiction writer, playwright, and translator. His work has appeared in StoryQuarterly, The Gettysburg Review, New England Review, The Idaho Review, Subtropics, Arts & Letters, Third Coast, AU, Prairie Schooner, Bloom, The Normal School, The Hopkins Review, Gargoyle, the anthologies Boy Crazy and New Stories from the Midwest, and elsewhere. His début novel, Sugarless, (University of Wisconsin Press, 2009) was a finalist for a Lambda Literary Award, the VCU Cabell First Novelists Award, and shortlisted for the 2010 William Saroyan International Writing Prize. Northwestern University Press published his linked story collection, Let Me See It, in 2014, and it was a Montaigne Medal Finalist in 2015. His second novel, Love Slaves of Helen Hadley Hall, was released in 2016 from Queen’s Ferry Press and reissued by Chelsea Station Editions.

Order your copies of You'll be Fine and Vamp Until Ready from the Ivy Bookshop.

Programs For Adults, Writers LIVE at the Library