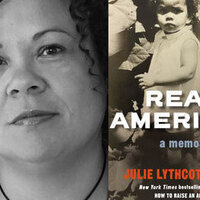 Real American by Julie Lythcott-Haims, bestselling author of How to Raise an Adult, is a deeply personal account of her life growing up as a biracial black woman in America. The only child of an African American father and a white British mother, she shows how so-called "micro" aggressions in addition to blunt force insults can puncture a person's inner life. Real American also expresses, through Lythcott-Haims' path to self-acceptance, the healing power of community in overcoming the hurtful isolation of being incessantly considered "the other."

Julie-Lythcott-Haims served as dean of freshmen and undergraduate advising at Stanford University, where she received the Dinkelspiel Award for her contributions to the undergraduate experience. She holds a BA from Stanford, a JD from Harvard Law School, and an MFA in writing from California College of the Arts. She is a member of the San Francisco Writers' Grotto.

The program will be introduced with a performance by Mohamed Tall. Mohamed Tall is Baltimore City's current Youth Grand Slam champion, former Baltimore City Poet Ambassador, as well as the 2 time Muslim Interscholastic Tournament spoken word champion. Mohamed has opened up for various entertainers such as Native Deen, the National Poet Laureate and Congressman Elijah Cummings.

The Ivy Bookshop will have copies of Lythcott-Haims' book for sale at a book signing following the program.