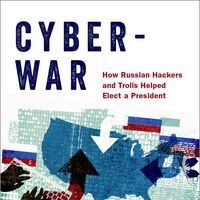 Drawing on path-breaking work in which she and her colleagues isolated significant communication effects in the 2000 and 2008 presidential campaigns, the eminent political communication scholar Kathleen Hall Jamieson marshals the troll posts, unique polling data, analyses of how the press used the hacked content, and a synthesis of half a century of media effects research to argue that, although not certain, it is probable that the Russians helped elect the 45th president of the United States.

Jamieson explains how by changing the behavior of key players and altering the focus and content of mainstream news, Russian hackers reshaped the 2016 electoral dynamic. While the goal of these hackers was division and not necessarily focused on a particular outcome, the data suggests that many voters’ opinions were altered by Russia’s wide-ranging and coordinated campaign.

Kathleen Hall Jamieson is the Elizabeth Ware Packard Professor of Communication at the Annenberg School for Communication of the University of Pennsylvania and Director of its Annenberg Public Policy Center. Among her award winning Oxford University Press books are Packaging the Presidency, Eloquence in an Electronic Age, Spiral of Cynicism (with Joseph Cappella), and The Obama Victory (with Kenski and Hardy).