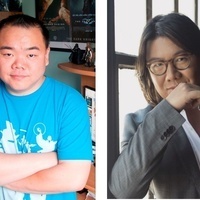 Kevin Kwan will be in conversation with Keith Chow about his work, culminating in the paperback release of Sex and Vanity.

Kevin Kwan is the author of the international bestsellers Crazy Rich Asians, China Rich Girlfriend, and Rich People Problems. Crazy Rich Asians was a #1 New York Times bestseller and major motion picture and has been translated into more than thirty languages. In 2018, Kevin was named by Time Magazine as one of the 100 Most Influential People in the World.

Keith Chow is the creator of the online community, The Nerds of Color, and host of the podcasts, Hard NOC Life and Southern Fried Asian, the latter of which was recently named an essential AAPI listen by Vanity Fair. His writing has been featured in The New York Times, NBC News, SYFY Wire, and the Center for Asian American Media (CAAM). He is also the co-editor of several comics anthologies, including Secret Identities, Shattered, and New Frontiers: The Many Worlds of George Takei.

Order your copy of Sex and Vanity from the Ivy Bookshop.