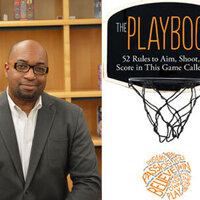 Newbery Medalist Kwame Alexander shares his rules of life, in conversation with the Pratt Library's Deborah Taylor. The rules contained in The Playbook aim to provide inspiration for kids, to help them succeed on and off the court. Each rule contains wisdom from inspiring athletes and role models such as Nelson Mandela, Serena Williams, LeBron James, Carl Lloyd, Steph Curry and Michelle Obama. Alexander also provides his own words of inspiration and uplift, as he shares his stories of overcoming obstacles and winning games. Illustrated with photographs by Thai Neave.

Kwame Alexander is a poet, educator, and bestselling author of 21 books, including Booked and The Crossover, which won the 2015 John Newbery Medal (for the Most Distinguished Contribution to American literature for children) and other honors and awards. Kwame writes for children of all ages. Visit his website: www.kwamealexander.com.

Thai Neave is a former SportsCenter Anchor for ESPN who now works as a freelance photographer and journalist.