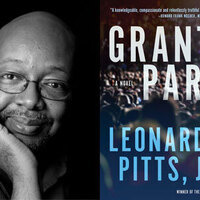 The night before Election Day in 2008, Toussaint sneaks an incendiary, racially charged column into the paper, defying his editors' wishes, and then promptly disappears. The next morning, with Toussaint nowhere to be found, Carson is fired. Toussaint has been kidnapped off the street by a pair of white supremacists who scheme to bomb Barack Obama's Election Night rally in Grant Park. Carson, furious and determined to confront Toussaint, must also deal with the sudden reappearance of his lost love, a fellow former peace activist now working for the Obama campaign.

Leonard Pitts' column appears in the Baltimore Sun. He is the author of the novels Freeman and Before I Forget, the memoir Becoming Dad, and Forward From This Moment: Selected Columns, 1994-2009.

The Ivy Bookshop will have copies of the book for sale at a booksigning following the program.