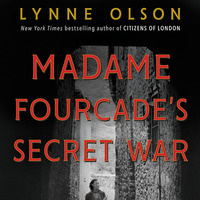 Lynne Olson will be in conversation with Will Englund.

Lynne Olson is the New York Times bestselling author of Last Hope Island: Britain, Occupied Europe, and the Brotherhood That Helped Turn the Tide of War, Those Angry Days: Roosevelt, Lindbergh, and America's Fight Over World War II, 1939-1941, and Citizens of London: The Americans Who Stood with Britain in Its Darkest, Finest Hour. Lynne Olson tells the riveting story of a woman who stood up for her nation, her fellow citizens, and herself in Madame Fourcade’s Secret War: The Daring Young Woman Who Led France's Largest Spy Network Against Hitler.

Pulitzer Prize-winning journalist Will Englund is the author of March 1917: On the Brink of War and Revolution, which explores events in Russia and the United States in the crucial weeks before American entry into World War I. A veteran Moscow correspondent, he covered Russia’s tumultuous 1990s for the Baltimore Sun and the 2012 return of Vladimir Putin to the presidency for the Washington Post.

The Ivy Bookshop will have copies of the authors' books for sale at a book signing following the program.

Church of the Redeemer 5603 Charles Street