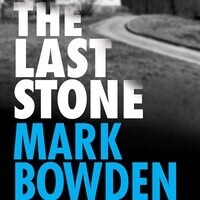 Mark Bowden will be in conversation with Dan Fesperman.

For forty years the mystery of what happened to the Lyons sisters, aged 10 and 12, who disappeared in 1975 from the Wheaton Plaza shopping mall in suburban Washington, D.C, haunted an entire community, including journalist Mark Bowden, who covered the story as a cub reporter. With The Last Stone, he now returns to the crime to cover the extraordinary effort by authorities to bring their kidnapper to justice and to try to answer the question he could never shake, “Who would commit such a crime? And, why?”

Mark Bowden is the author of thirteen books, including the New York Times bestseller Black Hawk Down. He reported at the Philadelphia Inquirer for twenty years and now writes for the Atlantic, Vanity Fair, and other magazines. He is also the writer in residence at the University of Delaware.

Dan Fesperman’s eleven novels have won international acclaim, winning the Dashiell Hammett award in the US and two Dagger awards in the UK. A former foreign correspondent for the Baltimore Sun, his travels have taken him to three war zones and more than thirty countries. His latest novel is Safe Houses. He lives in Baltimore.