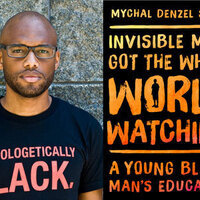 How do you learn to be a black man in America? For young black men today, it means coming of age during the presidency of Barack Obama. It also means witnessing the deaths of Trayvon Martin, Michael Brown and so many others killed by police or vigilante violence.

In Invisible Man, Got the Whole Word Watching, Mychal Denzel Smith chronicles his own personal and political education during these tumultuous years, describing his efforts to come into his own in a world that denied his humanity. Smith unapologetically upends reigning assumptions about black masculinity, rewriting the script for black manhood so that depression and anxiety aren't considered taboo, and feminism and LGBTQ rights become part of the fight.

Mychal Denzel Smith is a Knobler Fellow at The Nation Institute and a contributing writer for The Nation magazine. He has also written for the New York Times, Atlantic, Salon, The Guardian and other publications and has been a featured commentator on NPR, BBC radio, CNN, MSNBC and others.