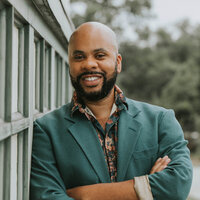 From the creator of Elle’s “Eric Reads the News,” a heartfelt and hilarious memoir-in-essays about growing up seeing the world differently, finding unexpected hope, and experiencing every awkward, extraordinary stumble along the way. In essays by turns hysterical and heartfelt, R. Eric Thomas redefines what it means to be an “other” through the lens of his own life experience. He explores the two worlds of his childhood: the barren urban landscape where his parents’ house was an anomalous bright spot, and the verdant school they sent him to in white suburbia. He writes about struggling to reconcile his Christian identity with his sexuality, the exhaustion of code-switching in college, accidentally getting famous on the internet (for the wrong reason), and the surreal experience of covering the 2016 election, and the seismic changes that came thereafter.

R. Eric Thomas (he/him/his) is a senior staff writer at Elle online where he has written the daily pop culture and politics humor column “Eric Reads the News” since 2016. He’s also been published by The New York Times, among many other publications. As a playwright, his work has been seen on stages around the country; he won the Barrymore Award and the Dramatists Guild Lanford Wilson Award and was a finalist for the Steinberg/American Theater Critics Association New Play Award. Off the page, he is the long-running host of The Moth StorySlams in Washington, D.C., and Philadelphia. He lives in Baltimore with his extraordinary husband, the Reverend David Norse Thomas, and an out-of-control collection of succulents, candles, and tote bags. Here for It is his first book.

Greedy Reads will have copies of the book for sale at a book signing following the program.