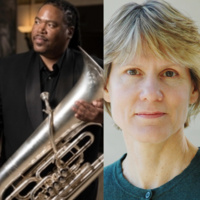 This event is FREE. Register for the event here.

Presented in partnership with Greedy Reads.

Richard Antoine White will be in conversation with Judith Krummeck about his life, work, and new book, I'm Possible: A Story of Survival, a Tuba, and the Small Miracle of a Big Dream.

Dr. Richard Antoine White began his tuba studies at the Baltimore School for the Performing Arts, where he graduated with honors. He went on to receive his bachelor's degree at the Peabody Conservatory of Music, and his master's and doctoral degrees at Indiana University. Dr. White was principal tubist of the New Mexico Symphony Orchestra from 2004 until its untimely demise in 2011. He is now principal tubist of the Santa Fe Symphony and is in his tenth season as principal tubist of the New Mexico Philharmonic. He enjoys teaching at the University of Mexico, where he’s currently the only African-American male full professor of tuba in the country.

Judith Krummeck is the evening drive time host for Maryland’s classical music station, WBJC, and she is the author of two books. "Beyond the Baobab" is a collection of essays about her immigrant experience. Her biographical memoir, "Old New Worlds," was a finalist for the 2020 Next Generation Indie Book Awards and the National Indie Excellence Awards. She is working on her first novel, and one of her screenplays is currently in development in Cape Town.

Order your copy of I'm Possible from Greedy Reads.