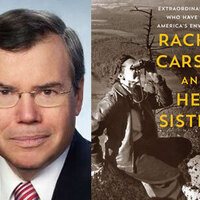 Rachel Carson, author of the 1962 bestseller, Silent Spring, was the first American to combine two longstanding, but separate, strands of American environmentalism -- the love of nature and a concern for human health. In Rachel Carson and Her Sisters, Robert K. Musil redefines the achievements and legacy of Carson, linking her work to a wide network of American women activists and writers, such as Ellen Swallow Richards, Dr. Alice Hamilton, Terry Tempest Williams, Sandra Steingraber, Devra Davis, and Theo Colborn, all of whom overcame obstacles to build and lead the modern American environmental movement.

Dr. Musil is president and CEO of the Rachel Carson Council. He is also a senior fellow and adjunct professor at the Center for Congressional and Presidential Studies, School of Public Affairs, American University. From 1992 to 2006, he served as executive director and CEO of Physicians for Social Responsibility.

The Ivy Bookshop will have copies of the book for sale at a booksigning following the program.