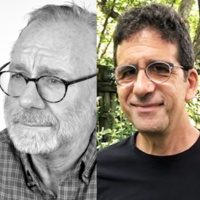 Registration not required, but encouraged to receive Eventbrite reminders. Please register for the event here.

Ron Tanner will be in conversation with Geoff Becker about his work and new book, Far West.

The ten stories in Ron Tanner's new collection, Far West, range widely--from a ruined fashion shoot in Baja California to a thwarted romance on a Pacific island. Quirky, funny, and sometimes near-tragic, these tales explore the idea of “frontier,” both emotional and geographic, as Tanner’s characters test the boundaries of their ambitions and strive mightily to realize their ever-elusive (American) dream. The author, who has lived and traveled extensively in America’s West, renders these landscapes with sensitivity and beauty, delivering with each story a journey that promises the unexpected at every turn.

Ron Tanner’s writing has been named “notable” in both Best American Essays and Best American Short Stories. His awards for fiction include the G.S. Sharat Chandra Prize, the Jack Dyer Prize, the Charles Angoff Prize, the Faulkner Society gold medal, Pushcart Prize, New Letters Award, and many others, as well as fellowships from the Michener/Copernicus Society, Sewanee Writers Conference, and the National Park Service, to name a few. His novel Missile Paradise was named a “notable book of 2017” by the American Library Association. His most recent book, Far West, a story collection, won the Elixir Press book prize in 2020 (pub. date 2022). He lives on a historic farm in Maryland and directs the Good Contrivance Farm Writer’s Retreat, an educational nonprofit

Geoff Becker is the author of the novels Hot Springs (Tin House Books) and  Bluestown (St. Martin's Press), as well as two story collections: Black Elvis (University of Georgia Press), and Dangerous Men (U. of Pittsburgh Press). His awards and honors include: the Drue Heinz Prize for Literature, the Flannery O'Connor Prize for Short Fiction, The Nelson Algren Award from the Chicago Tribune, an NEA Fellowship, awards from the Maryland Arts Council, and inclusion in the Best American Short Stories anthology.

Order your copy of Far West from the Ivy Bookshop.