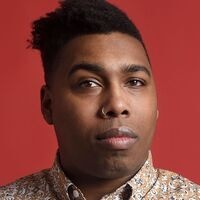 Writers LIVE! Saeed Jones, How We Fight for Our Lives

Saeed Jones will be in conversation with Clint Smith. Presented in partnership with CityLit Project.

Haunted and haunting, How We Fight for Our Lives: tells the story of a young, black, gay man from the South as he fights to carve out a place for himself, within his family, within his country, within his own hopes, desires, and fears. Through a series of vignettes that chart a course across the American landscape, Jones draws readers into his boyhood and adolescence—into tumultuous relationships with his mother and grandmother, into passing flings with lovers, friends and strangers. Each piece builds into a larger examination of race and queerness, power and vulnerability, love and grief: a portrait of what we all do for one another—and to one another—as we fight to become ourselves.

Saeed Jones is the author of Prelude to Bruise, winner of the 2015 PEN/Joyce Osterweil Award for Poetry and the 2015 Stonewall Book Award/Barbara Gittings Literature Award. The poetry collection was also a finalist for the 2015 National Book Critics Circle Award, as well as awards from Lambda Literary and the Publishing Triangle in 2015. Jones is a co-host of BuzzFeed’s morning show, AM to DM, and previously served as BuzzFeed’s LGBT editor and Culture editor. Jones was born in Memphis, Tennessee, and grew up in Lewisville, Texas. He earned a BA at Western Kentucky University and an MFA at Rutgers University-Newark.

Clint Smith is a writer, teacher, and doctoral candidate at Harvard University. He is an Emerson fellow at New America and has received previous fellowships from the Art For Justice Fund, Cave Canem, and the National Science Foundation. He is a National Poetry Slam Champion whose writing has been published in The New Yorker, The New York Times Magazine, The Atlantic, Poetry Magazine, The Paris Review, and elsewhere. His first full-length collection of poetry, Counting Descent, was published in 2016. It won the 2017 Literary Award for Best Poetry Book from the Black Caucus of the American Library Association and was a finalist for an NAACP Image Award. His debut narrative nonfiction book, How the Word Is Passed, is forthcoming from Little, Brown.