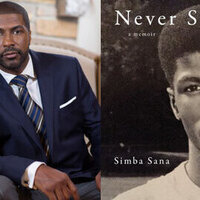 In his memoir, Never Stop, Simba Sana (born Bernard Sutton) begins by recounting his childhood in inner-city Washington, DC, in the '70s and '80s, which was marked by poverty, violence, the drug trade, a bout of homelessnes, and the challenges imposed by his single mother's mental illness. Sana was a strong student, a college graduate, and a successful professional at Ernst & Young. At the same time, he grew into an impassioned Black Nationalist and Pan-Africanist.

In an attempt to bind these disparate elements of his life together, Sana cofounded Karibu Books, a successful black-owned bookstore chain in the DC area. However, he suffered a series of business reversals and lost everything he had worked so hard to build, including his marriage and family. Never Stop is a story of success, struggle, and the journey to rebuild a life by focusing on the meaning and the importance of love.

Simba Sana graduated from Mount Saint Mary's University. He holds master's degrees from Howard University and St. John's College. He lives in Maryland with his wife and three children.

The Ivy Bookshop will have copies of the book for sale following the program.