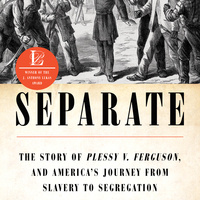 Steve Luxenberg will be in conversation with Judge Robert M. Bell.

Award-winning author Steve Luxenberg draws from letters, diaries, and archival collections to tell the story of Plessy v. Ferguson through the eyes of the people caught up in the case. Separate: The Story of Plessy v. Ferguson, and America's Journey from Slavery to Segregation depicts indelible figures such as the resisters from the mixed-race community of French New Orleans, led by Louis Martinet, a lawyer and crusading newspaper editor; Homer Plessy’s lawyer, Albion Tourgée, a best-selling author and the country’s best-known white advocate for civil rights; Justice Henry Billings Brown, from antislavery New England, whose majority ruling endorsed separation; and Justice John Harlan, the Southerner from a slaveholding family whose singular dissent cemented his reputation as a steadfast voice for justice.

Steve Luxenberg is the author of the critically acclaimed Annie’s Ghosts: A Journey into a Family Secret. During his thirty years as a Washington Post senior editor, he has overseen reporting that has earned numerous national honors, including two Pulitzer Prizes. Separate won the J. Anthony Lukas Work-in-Progress Award.

Judge Robert M. Bell is an American lawyer and jurist from Baltimore, Maryland. From 1996 to 2013, he served as Chief Judge on the Maryland Court of Appeals, the highest court in the state. He was the first African American to hold the position.

The event is co-presented by OSI-Baltimore as part of its Talking About Race series.