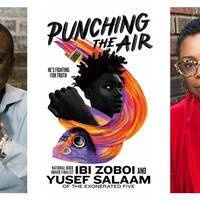 Join the Young Adult Services department as we kick off our YA Writers Live  series for 2021 with the amazing Ibi Zoboi and Dr. Yusef Salaam as they discuss their novel "Punching the Air".

Ibi Zoboi was born in Port-au-Prince, Haiti, and holds an MFA in writing for children and young adults from Vermont College of Fine Arts. Her novel American Street was a National Book Award finalist and a New York Times Notable Book. She is also the author of Pride and My Life as an Ice Cream Sandwich, a New York Times bestseller, and Punching the Air with co-author and Exonerated Five member, Yusef Salaam. She is the editor of the anthology Black Enough: Stories of Being Young & Black in America. Raised in New York City, she now lives in New Jersey with her husband and their three children.

Dr. Yusef Salaam was just fifteen years old when his life was upended after being wrongly convicted with four other boys in the “Central Park jogger” case. In 2002, after the young men spent years of their lives behind bars, their sentences were overturned. Now known as the Exonerated Five, their story has been documented in the award-winning film The Central Park Five by Ken Burns, Sarah Burns, and David McMahon and in Ava DuVernay’s highly acclaimed series When They See Us. Yusef is now a poet, activist, and inspirational speaker. He is the recipient of a Lifetime Achievement Award from President Barack Obama, among other honors. He lives in Atlanta, Georgia, with his wife, Sanovia, and their children.

This is sure to be a great conversation! Join us here!